It’s not to the level of Ali-Frazier, Cubs-Cardinals or even Nicki Minaj-Miley Cyrus, but the battle is on. The garden pest I struggled with last year is back. In case you need a refresher, here’s last year’s post on the pooping bandit.

Not so foolproof plan

At the beginning of the Spring, the ground near the garden was sunken in from the tunnels or home the pest had dug next to the garden. I figured we outsmarted it when we (okay Steve) filled in the area with stones and multiple layers of dirt. Problem solved!

It took most of the summer but the holes and sunken area have returned. I have a feeling the pest will keep coming back so I’m not sure whether to just worry about protecting the garden or to try eliminate the pest completely. 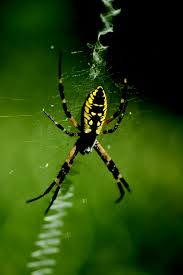 Another pest I’ve been dealing with late this summer in the garden and around the house is the guy to the left. It looks very scary and dangerous and possibly even poisonous, right? That’s what I assumed when I saw it camped out over the garage side door a couple of weeks ago. The web got so big and thick that we could no longer use that entrance into the house. We had to use the automatic garage door instead.

After a few days of not being able to enter the house where we wanted, one evening I turned the hose on and pointed the jet and all my fury directly at the spider for several minutes. Finally it fell out of sight. I was proud I had taken use of our door back. Later I did find out the spider was harmless.

Sam was staying with us and the next morning when he came out of the side door he asked where the spider was. And he asked again that evening. I told him the spider had found a new home. He concluded it was just out hunting for prey and would be back. I was impressed that he knew about the predatory habits of spiders but felt bad about lying to a small child. Who knows, maybe spider did find a new home in my garden.