I’m now in the maintenance phase of gardening. The initial high of starting my own garden has started to fade. It’s kind of like the period a few weeks after the wedding. Once the party and celebration are over, you gotta deal with the day to day stuff. My husband’s pretty awesome and I was very happy to marry to him, but the honeymoon period eventually ends. Real life has a way of doing that. Anyway, that’s what’s happened with my garden; I’m out of the honeymoon period and I’m now keeping up with the day-to-day.

I’ve been tending to my garden by watering every other day and weeding regularly. Actually, I’ve only been weeding the pre-existing 4X4′ bed. The 4X8′ bed with the soil and compost mix and lining doesn’t need to be weeded. Awesome! Note to self- next year start from scratch on the smaller bed and get new soil for less work. Come next spring, I’m sure the future me will be saying thanks for the tip.

The garden is less work than I thought it would be at this stage but then again the seedlings still aren’t very big. I have to admit it’s really cool to see the seeds I planted just  a few short weeks ago grow into actual plants and eventually food!

I planted six cucumber seeds and three are growing. I had a fourth but I accidentally pulled it up when I was weeding the smaller bed. Whoops. I planted six watermelon seeds and out of those, four sprouted. After they got to be about 3 inches tall, I had to thin them out to three. Easy enough, I just plucked one from the dirt. Later that week, I wish I would’ve left it. What I suspect is my garden pest had pulled up the third one so I was left with two. Not cool. The carrots and lettuce are still pretty small but they’re growing slowly but surely.

Below are current views of my garden. 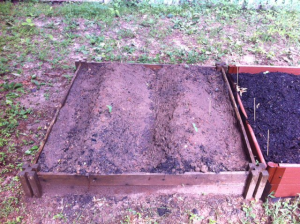 View of both beds with a little green.