I made an error last week and scheduled this post for publishing before I got it done. Below is the post in its entirety. 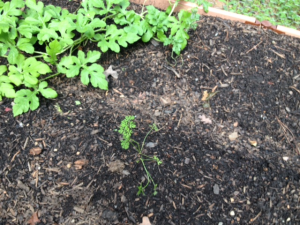 I know some of you were probably thinking that I was referring to a certain type of weed in my title. No, this isn’t Colorado or Washington; I’m referring to a typical garden invader. I’ve got something growing in my garden and I’m not sure if it’s a carrot I planted or if it’s just a weed that needs pulling. See picture on the right.

So, new game- weed or vegetable? Anyone who can tell me which it is will receive fresh produce from the garden! Well, when the produce comes in. Looks that might still be a few weeks away. I’d go ahead and pull whatever it is but I’d be upset if I pulled a carrot before it was fully grown. The garden is not exactly spilling over with produce.

On the other hand, my cucumber and watermelon plants are growing like weeds. They’re starting to take over their corners of the garden. When I went out there to check on how things were progressing, I noticed that one of the cucumber plants had reached out and had twisted one of its tendrils around a stake. I thought it was pretty cool. 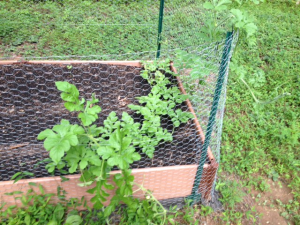 Watermelon taking over a corner of the garden 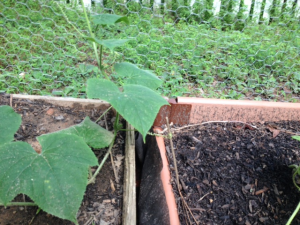 Cucumber plant twisting around a stake