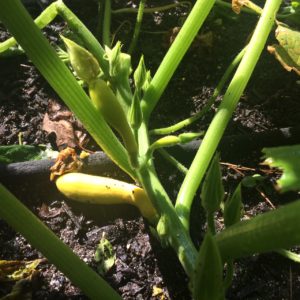 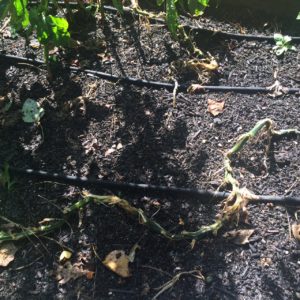 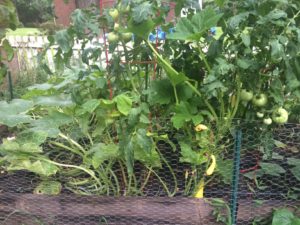 This year is the best by far in my garden- a great thing! I’ve already picked more than a dozen cucumbers and a couple of squash. The tomatoes should be ripe by the end of the month. But like Biggie said, mo garden mo problems. Well, not exactly that, but something very similar.

I’ve been checking on my garden daily. Earlier this week, I noticed I had multiple problems. Here’s how I addressed each one: 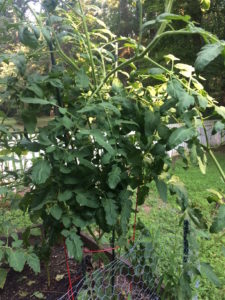 Out of control tomato plant

Bending and Snapping Tomato Plants- My tomato plants have gotten far bigger than I thought they would. I bought cages at the beginning of the summer to support them, but each plant is now at least a foot taller than the cage. Luckily this was an easy fix. I staked the plant by tying the main stalk of each plant to a pole with a string. As the plants grow, I can use taller poles and retie the string to better support the plants.

White Spots on Cucumber Leaves- I noticed several squash plant leaves had white spots or were covered in a white powder. After doing a quick search, I found out this was a fungus. There are multiple treatment methods, but I settled on a milk and water mixture because it seemed pretty effective based on feedback. Just spray on the leaves once a week and the problem should go away.

Yellowing and Browning Cucumber Leaves- Some of the leaves on my cucumber plants started turning yellow and brown, then dying. I had no idea what this was so I went straight to Google. This was about as big a mistake as going to WebMD to look up your medical symptoms. I found out the problem could’ve been anything to nothing to a rampant plant killing fungus. Much like what happens when I use WebMD, I jumped to the worst case scenario. My entire plant was dying. For a little extra help, I contacted Wake County NC Cooperative Extension Master Gardeners. Luckily, these experienced gardeners calmed me down. The gardener told me that the soil likely needed more nitrogen and recommended fish fertilizer. I purchased some and applied as directed.

We will see if these remedies cure my garden problems. On the bright side, my crop over a two-day period this week. 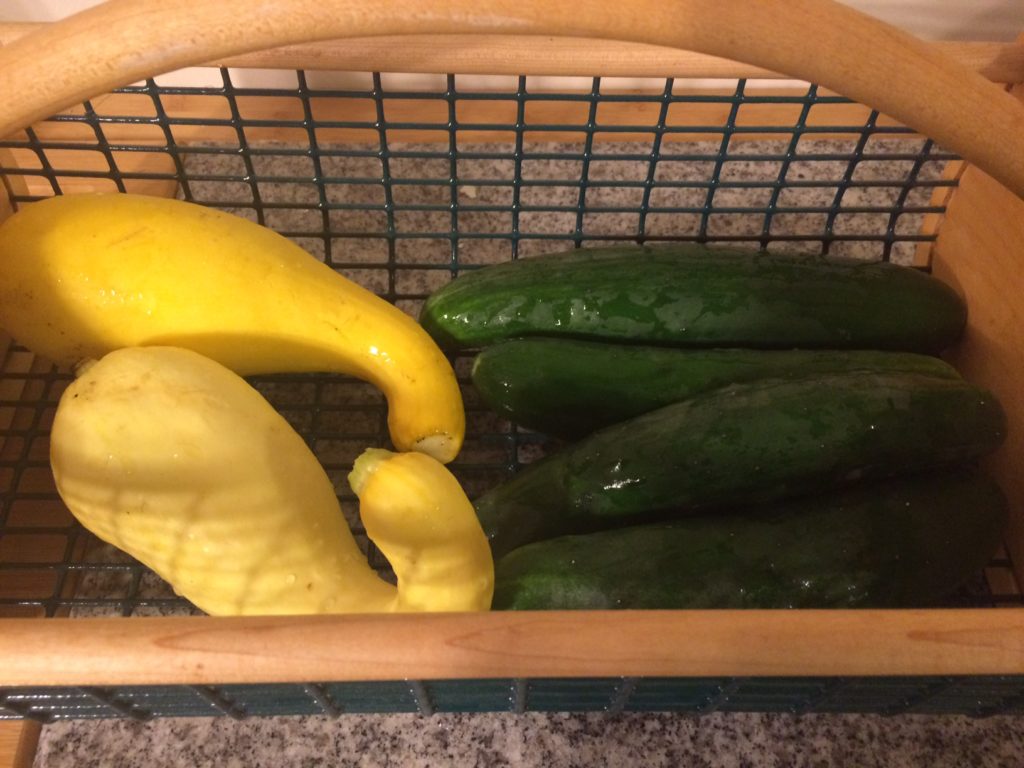 I decided to revive my garden all-stars edition, which I started last year. In this now annual tradition, I take stock of failures and celebrate successes over the first half of the summer gardening season. I borrowed this idea from Major League Baseball which takes a mid-season break to celebrate it’s best and reflect on the season thus far.

And since I mentioned the MLB All-Star game, I have to note that my Cubs locked down the entire starting infield. This is only the second time in the 87-year history of the game this has happened. This is a big deal people! For those of you hating on my Cubs, deal with it. They are incredible good.

Anyway, let’s get to it.

My cucumbers were the first vegetables to ripen. They’re thick and coming in at the perfect shade of green. I picked the first one yesterday and placed it in my vegetable basket. Although lonely now, there will soon be plenty more cucumbers to keep it company. 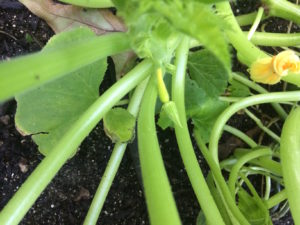 My tomatoes, peppers and squash are still in the early growing stages, but are coming along nicely. In just a few weeks, they’ll be fully grown. Baby vegetables are so cute!

Poor Performers
I’ve planted lettuce twice now with no luck. The first seedlings sprouted and didn’t really progress. The second batch of seeds were starting to doing a little better. Unfortunately, we got a major thunderstorm and it destroyed the immature plants. I haven’t decided if I’m going to go for round three.

I’m going to add myself to the poor performers list. I had planned to have everything planted by mid-April. But I got behind and due to a long spring vacation, I didn’t get to plant until mid-May. I’m disappointed that the garden is a month behind of what I originally planned.

But hey, you can’t win them all. Unless you’re the Cubs! I’m just happy that this year’s mid-season report is much better than 2015.

Well folks, this is a post I meant to write six weeks ago but never quite got around to. I can’t blame it on the World Cup, football or anything else. Just my pure laziness and procrastination. Its several weeks late, but this is my farewell until next gardening season.

This year has seen both good times and bad. The good- lots of fresh tomatoes and a few cucumbers, some lettuce and strawberries here and there. The bad- realizing I could’ve had way more tomatoes if I had pruned the stalks properly, bugs and bacteria killing the plants and my non-functioning compost pile.

Since this is my last post for this year, I suppose I can make a confession hoping you’ll forget about it by next spring. Last month, we had about two straight weeks of rain. During this time, I assumed all the plants in the garden had died from oversaturation. Imagine my surprise when Steve walked in shortly after the rain spell ended with several red, ripe tomatoes in hand. At that moment I felt like the world’s worst gardener, having abandoned my plants which were still very much alive.

I realized then I still have a lot to learn when it comes to gardening. Year two was much better than year one but I know I have a ways to go. No worries though, I plan to turn this year’s mistakes into next year’s successes.

And to answer a burning question from commenters on my first blog post- I’m not a gardening virgin anymore, but I still plan to keep the name. Thanks to everyone who took the time to read my blog this spring and summer and encouraged me with kind words while doing so.

Tune in to next spring to see how it goes for this Veggie Garden (somewhat) Virgin!

I realize I’ve been very slack the last few weeks on my blog. I kept telling myself I would post and then something would come up like watching college football or watching pro football or looking at slideshows of dresses worn by actresses at the Emmy Awards. (And so happy to see Viola, Uzo and Regina all won big awards Sunday night! It’s about time the Emmy’s got with the program.)

As an aside, your weekends go by quickly when you watch college football all day Saturday and take in multiple pro games on Sundays. I know, I know, my life is rough. 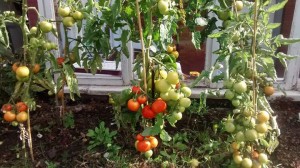 Since the days have gotten shorter and cooler, I’ve noticed that my tomatoes aren’t ripening as frequently. It doesn’t help that I saw a picture of my sister-in-laws voluminous tomato vines and realized that’s how mine were supposed to look.

It seems like I’ve had the same green unripened tomatoes on the vine for several days now.  I am in the South, so I suppose I can fry them up for a delicious treat. But I’d rather have juicy, red tomatoes for sandwiches and salads. On the bright side, I have another cucumber on the vine so all hope is not lost.

I know I still have time and my garden can keep producing into the first frost; sometime in November in North Carolina. But my thoughts have already turned to what I need to do to winterize my garden.

It’s late August so that means two things- summer is nearly over and it’s back to school time. One I imagine parents are unhappy about but the other, very happy about. Like clockwork, my Facebook feed over the past week filled up with pictures of kids at the end of last school year and kids preparing for their first day of the 2015-2016 school year. Seeing the children grow in just a few short months made me think of my garden.

Only four short months ago, I had a few seedlings. Now I have tomatoes, cucumbers and lettuce for the picking. Enjoy watching my garden grow over the summer in the slideshow below. 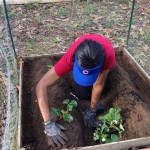 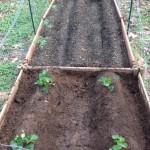 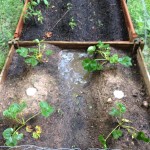 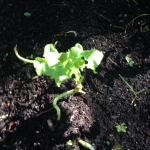 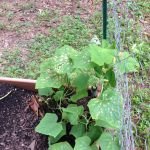 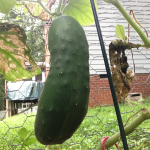 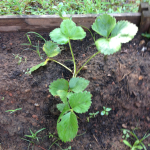 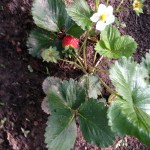 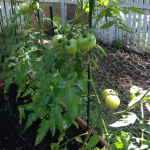 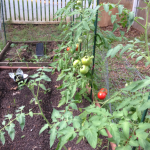 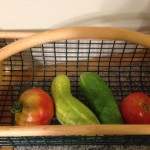 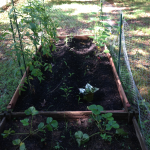 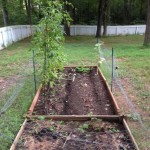