This will be my last post about my garden for the year. I’m not planning on doing a fall or winter garden. Thanks for those of you who have stopped by and taken the time to read about my gardening adventures. I did this mostly for myself and to help others who were gardening virgins like me, but it was nice to know that others read the blog too.

I will start again in the spring, although I won’t be a veggie garden virgin anymore. A quick rundown of what I learned this summer:

1. Start early- You can start planting after the last frost of the spring, which in North Carolina is around mid-April. I figured I still had plenty of time after that because it didn’t start to get warm until mid-May. Due to procrastination, I didn’t really get started until the end of May. Next year, I will start a lot easier so I get more produce out of the garden.

2. Root vegetables are evil- I will stay away from root vegetables. I had long carrot tops in my garden and picked them figuring  the carrots would be several inches long. Wrong! The two carrots together probably added up to two inches. When I told someone about my underperforming carrots, she admitted that she had the same problems of being able to tell when root vegetables were ready.

3. Watermelons will take over the garden- I planted watermelon because I enjoy them and thought they would be great to eat throughout the summer. Unbeknownst to me, watermelons grow on very large vines that like to spread out and up, taking over everything in its path. Much like the blob. Fewer watermelon seeds next year.

4. Fertilize more- I fertilized very few times over the summer. I bought rich soil and thought that would be enough. This is probably the reason why my produce was rather anemic. I will fertilize more next summer and hopefully start a compost bin.

5. Beds need regular maintenance- I made sure to do regular weeding, watering and all the typical maintenance but once the heavy rains came over  a week to one and a half week period, I dropped the ball. The mini floods caused the garden mounds to flatten out. I didn’t rebuild them because I didn’t want to disturb the growth process. Now I realize that I should have rebuilt the mounts to improve drainage.

6. Take no prisoners when it comes to garden creatures- I knew I had a problem with creatures in my garden for several weeks before I took action. The fence proved to be very effective. Lesson learned is not to wait so long next time. Take decisive action and don’t put up with creatures eating your vegetables and pooping in your garden.

I’m sure there are many more lessons I’ve learned throughout the summer, but these six immediately came to mind.

I had high expectations for this blog when I started this venture- I was going to post twice a week, build a community of gardeners and the blog was going to catch on. Well, that didn’t quite happen or even come anywhere close. Due to summer travel, the World Cup and taking on a couple of new volunteer projects, I’ve barely managed to keep up. Such is life, I suppose. Unfortunately, this is going to be the end of the road (Boys II Men chorus going through my head) for the blog this year. Well, maybe one more post after this. Gotta tell you what I learned! 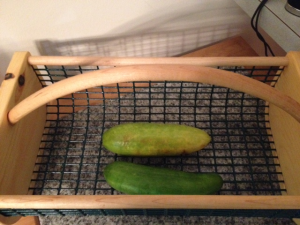 Let me start off with the good. I finally got edible produce from my garden! I pulled two cucumbers from my garden which you can see on the right. One is a healthy green and the other is yellowish. That’s because we got a TON of rain over a week to week and a half period. Too much or too little water can cause the yellow color.

I didn’t care; I finally got to use my produce basket! On the other hand, with all of the money I put into the garden, the cost for each cucumber averages out to about $100. Not exactly cost effective. I cut up the good cucumber and put it in a salad. Delicious if I must say!

That was the mostly good. The bad was that one of my watermelons split open. I believe that this was a result of the heavy rains as well. The garden became saturated and the soil didn’t drain well. I’m down to one watermelon. I’m waiting for it to fall off the vine. I’m sure it will be delicious though. 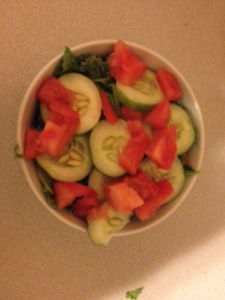 Salad with my garden cucumber 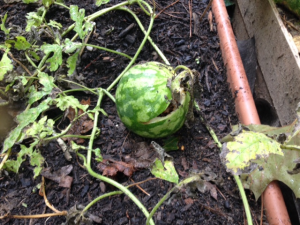 Things in the garden are still going well; the watermelon and cucumbers are getting larger and I’m seeing new sprouts each week. This post is focusing on another vegetable in my garden- the carrot.

A couple months back I planted a row of carrot seeds. Weeks went by and I didn’t see any results. I figured they just never sprouted. In this post, I asked if the green things were weeds or vegetables. The consensus was that they were vegetables. The group was right, but I was oh so wrong. 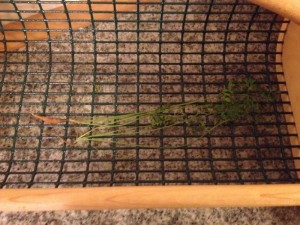 The greenery sticking out of the garden was about a foot high. I thought if these were the carrots I planted, they would be pretty large by now. So, I went ahead and picked what I was sure were flourishing orange carrots. You can see the results to the right. The long, green tops fooled me. The bigger of the two carrots was barely
a nub and very very thin. The other wasn’t even worth taking a picture of. But I did want to put this very nice produce basket (a lovely gift from my mother-in-law) to use. Even though I made a judgement error on the carrots; I’m sure I will soon have enough produce to fill the basket.

On a brighter note, check out the cucumber below. Almost ready to pick! 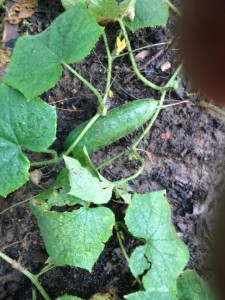